Faith Ringgold for teachers and students: 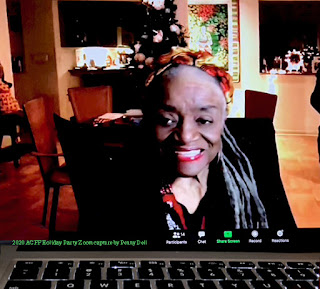 'Black Art: In the Absence of Light'  Reveals a History of Neglect. An HBO documentary explores two centuries of art by African-Americans, and the path they forged for contemporary Black artists. “This is Black art. And it matters. 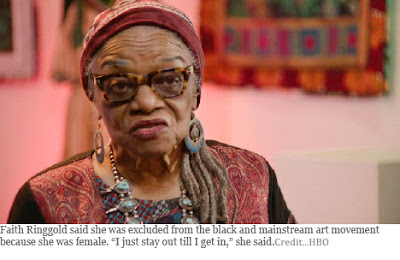 The Story of Tar Beach 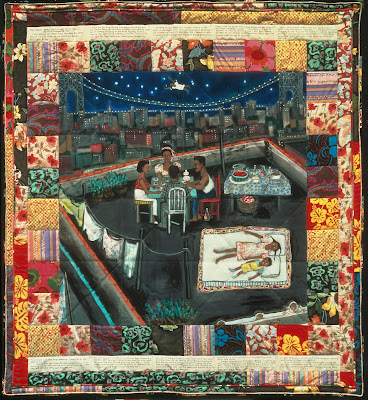 Tar Beach tells a story about the time when FR was a little girl.

poster of the Tar Beach quilt in her doctor's office.

Andrea knew loved the story so she called Faith Ringgold

to ask if FR would make Tar Beach

into a children’s book. It was the first children’s

book that Faith Ringgold made, and it was a winner!

Tar Beach is in the collection of the Guggenheim 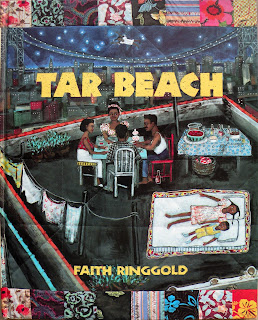 A sweet animated video of Tar Beach is included in HBO's

Goodnight Moon and Other Sleepytime Tales

Artists make works that express something about themselves.

Seven Passages to a Flight is FR's  autobiographical story told in 9 panels.

It is a hand printed quilt and book.

What story will you tell with 9 pictures? 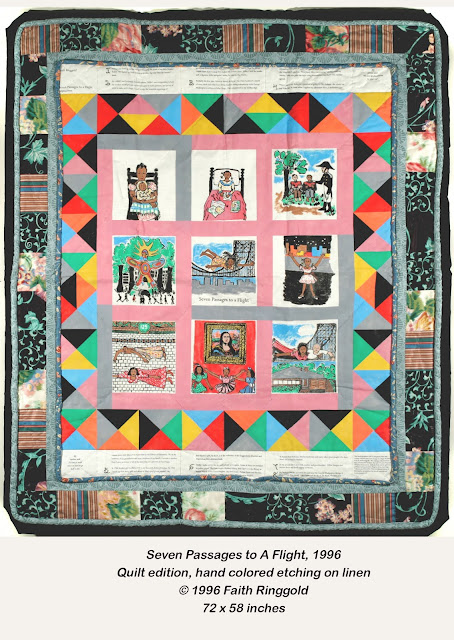 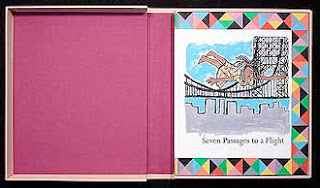 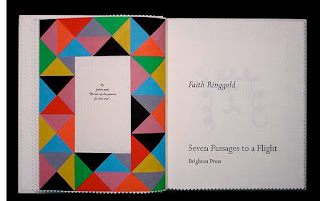 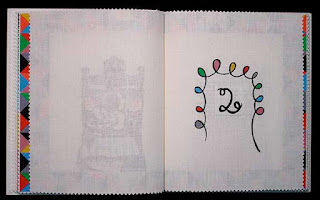 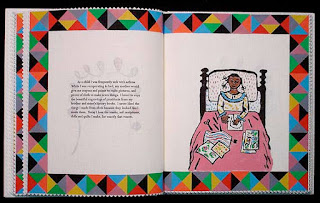 Faith Ringgold tells stories about history and other people too.

She wrote a book about the Underground Rail Road, 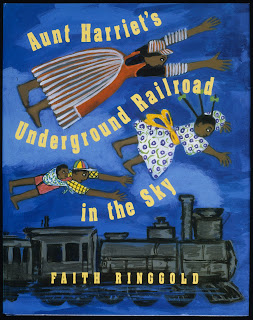 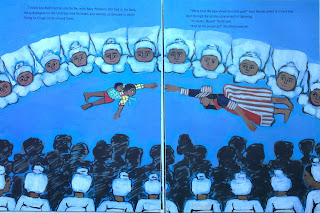 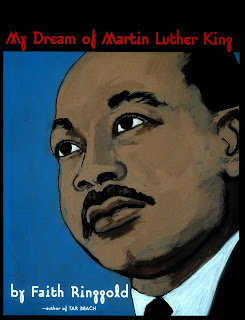 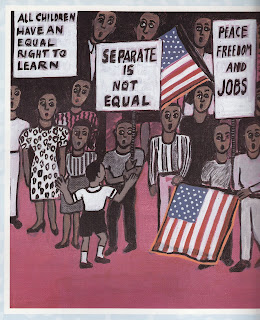 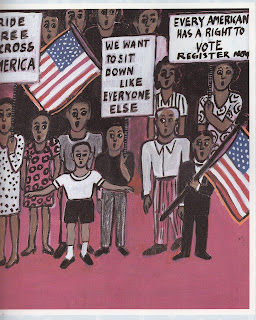 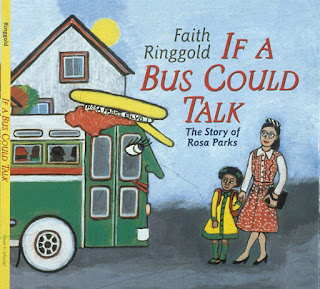 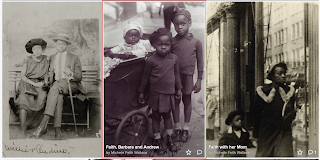 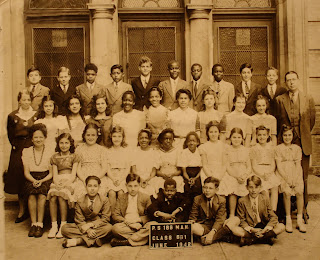 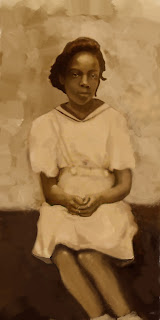 Ans. I graduated from PS 186 in June of 1942. I was eleven years old and in the 6th grade when I graduated. I began school in the 1st grade 1936 at PS 186. I never went to kindergarten because I had asthma and was at home sick a lot of the time recuperating.

Who was the principal? How was he/she?

Ans. The principal I remember was Dr. Bernath. He was a very nice man. He often came to our classrooms and took over a lesson while our teacher observed. He was a master teacher.

What were your friends like? What things did you do with them?

Ans. My best friend, Catherine English, and I were selected by Dr Bernath in the 6th grade to be his monitor during lunchtime. Catherine and I went all through Elementary, Junior High and High School together. We ate lunch together, studied together and played with cut out dolls.

Who was your favorite and least favorite teacher? Why?

Ans. I don't recall any special attraction to any of my teachers. They were all good teachers in that they taught us. The kids in my classes were really smart and worked hard to keep up. There was simply no excuse for not doing homework or falling behind. The black kids were under pressure to show excellence. It was expected of us at home and in school. Many of my teachers appeared to be personally intolerant toward black kids and showed very obvious differential treatment. But they expected all of us to excel with our work. Which was all we learned to expect from them.

What race were the teachers?

Ans. The teachers were all white and mostly Irish Catholic. They were probably 1st generation immigrants. They were keen on telling us African American kids to get a good education or don’t complain about being held back later in life.

What races were the students?

Ans. The students were immigrants from Cuba, Puerto Rico and Germany. We were cautioned to be welcoming to the Jewish children from Germany who had escaped Hitler's wrath. Graduation ceremonies in 1942 were suspended for fear that there would be an "air raid" during the ceremonies and the parents would be ill prepared to cope with the procedures we had for taking cover.

Were the teachers racist in any way towards you or any of the minority kids?

Ans. The air of racism was undeniable it "colored" everything we learned. About slavery we were taught such things as "the coloreds were happy go lucky" as if to say that slavery was a blessing for a people who were born to be inferior. I was a good student and always took these little racist tid bits home. The next day my mother would be in school. Teachers were full of praise for my mother. As a result they would teach from the book and not add their own opinions. I came from a family of teachers so as far as black history, slavery, and other racial issues were concerned a loving and knowledgeable family and friends taught us at home. However preferential they were, toward the white kids in general and the boys in particular, I was always selected to be the class artist with all my teachers. They were extremely supportive of my ability to draw and paint. Many/most teachers practiced favoritism at that time.

What were the race relations like between the students?

Ans. We all lived in segregated neighborhoods. Children sought friendships with kids of similar racial backgrounds. Of course there are always exceptions. But none I can recall. I never had any white friends until I went to College.

Did you have a school nurse and how was he/she?

Ans. having asthma I was familiar with the school nurse. She was a nice woman.

Were there any clubs, after school activities, dances, or school plays? And did you attend any of them?

Ans. We had weekly assemblies for which we had to wear a white blouse and dark skirt. Assemblies were formal. There were WPA murals in our auditorium. I enjoyed going to assembly so that I could see the beautiful paintings on either side of the stage.

What did you like and dislike most about the school? Why?

Ans. I didn’t like the “teachers pet” favoritism many teachers showed for some kids and the racist attitudes that were passed down to the kids. On trips, who would sit with the teacher and walk and hold hands with the teacher was always a white boy or girl. I never accepted the second-class

Citizen position I was often placed in because I was black. For that reason school was not my favorite place to be. As far as I was concerned, I was on my way to college, an education was my ticket to fly

Was there a loudspeaker for announcements and did you have to say the pledge of allegiance every morning?

Ans. We were required to say the pledge of allegiance and sing the Star Spangled Banner every morning in our classrooms.

Did you have to wear a school uniform and if you did how was it? Did you like it?

Ans. No ID cards or numbers.

Ans We were graded on a curve. This meant that if you planned to get an A you had better make sure you were in the top of your class (A+) and that the teacher was well aware that you expected that A.

How was the school lunch?

Ans. I never ate school lunch. My mother came lunchtime and brought my lunch to me.

Did you have a school library?

Ans. I loved the weekly library period at school. There was also a branch library up the street. Our teachers took us there also. The librarian would read to us. These were some of my fondest memories of PS 186.

How did you feel when you heard the school closed?

Ans. I was sad to see it deteriorate all these years. 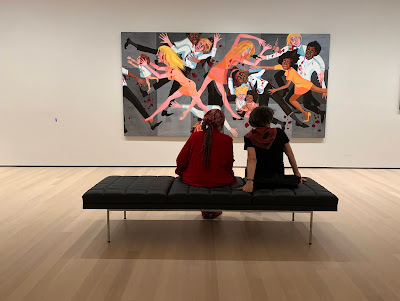 5 Fast Facts: Faith Ringgold from the

National Museum of Women in the Arts